Posted by Luis Munoz at 3:23 PM No comments: 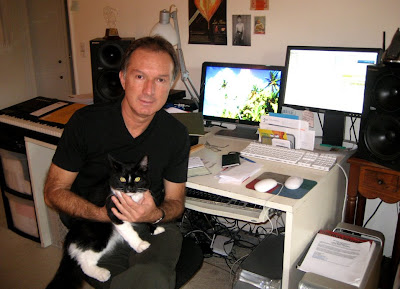 It’s been over a month since I last posted on my blog. I’ve been very busy. Two things have been taking all my time lately. Number one, I started recording a new CD. So far, I’ve been working in my home studio, doing most of the work myself. However, bassist Tom Etchart, guitarist Narciso Sotomayor, keyboardist George Friedenthal and singer Teka have also stopped by to do some tracks for me. So far, I have 9 new compositions among them: Malabarista (The Juggler), Manantial, Sendero Luminoso and Tango y Sangre de la Media Noche. The recording won’t be released for another year, but it sure feels great to get started with it.

The other thing that has been keeping me busy is politics. I am proud to say that I’ve been spending lots of time trying to help Mr. Barack Obama become the next president of the United States. I’ve also been involved with the upcoming local elections, helping Louise Capps, Pedro Nava, Anna Beth Jackson and the rest of the Democratic candidates. I’ve met some wonderful people on the way. It’s been a very interesting endeavor, making phone calls all over the country, talking to people, sharing ideas, and listening to their fears, hopes and interests. A wonderful learning experience and a satisfying one. I hope to be celebrating Mr. Obama’s victory this coming Tuesday.
Posted by Luis Munoz at 3:19 PM No comments:

You can obtain mechanical licenses in the U.S. through The Harry Fox Agency (HFA)